Motorcycle riding is fun. But it is also dangerous, which is probably part of the reason that makes it so much fun.

Most motorcycle accidents occur because the driver did not see the motorcycle. Experienced riders understand this, and they take every possible precaution. They stay sober and alert, and they always expect the unexpected. Just because an approaching car does not have a flashing left turn signal does not mean that the driver is not going to make a left turn in front of you.

In motorcycle accidents riders can be seriously injured. And the first question is always, “Was the rider wearing a helmet?” Oklahoma, like many other states, has a “comparative fault” rule, which can severely limit the rider’s ability to collect compensation.

In the above case involving an illegal left turn, this means the rider can be found partially at fault for not wearing a helmet. 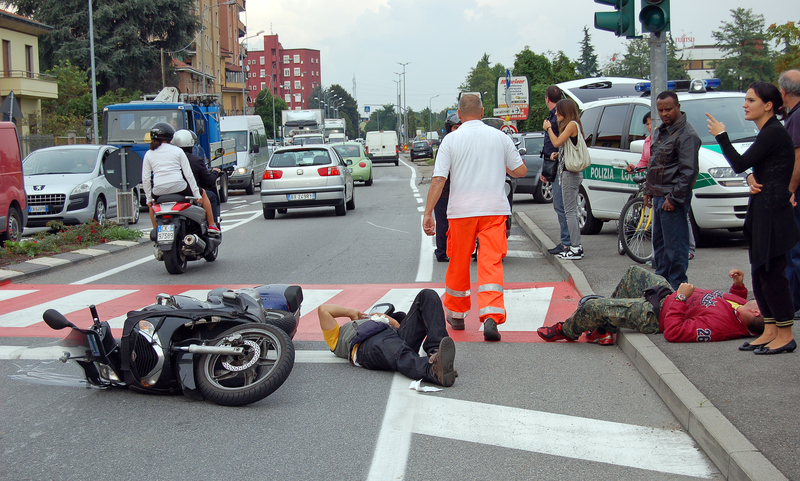 Unfortunately, many judges, jurors and journalist buy into the argument that helmets do prevent injuries. And there are numerous studies that attempt to prove this point. But the overwhelming number of these studies are bought and paid for by the insurance lobby, the medical lobby, or the people who manufacture and sell motorcycle helmets.

Should you be involved in a lawsuit where you were not wearing a helmet be prepared for a fight. The battle will be fought with statistics, and the insurance company can afford the legal equivalent of a navy SEAL team. So you cannot afford to walk into court with your family lawyer or a slip-and-fall all-purpose personal injury lawyer.

You will need a battle hardened veteran motorcycle accident attorney. This will be someone who is familiar with the highly priced but also highly prejudiced “expert” studies and who has experience in exposing the flaws in the testimony of so-called expert witnesses.

All but two states have laws regulating motorcycle helmet use. And these laws were not passed without transportation committees listening to thousands of hours of testimony presenting statistics on both sides of the issue.

You can compile lists of numbers and claim that they prove whatever you want them to prove. However, outside of their surrounding context statistics are meaningless.

For example, in 2003 Pennsylvania modified the motorcycle helmet law to allow mature and experienced riders to ride without a helmet. In less than a year the insurance and medical lobbies were producing statistics that showed that there was an increase in motorcycle fatalities.

It is also claimed that states with no helmet laws have a higher percentage of fatalities than states with mandatory helmet laws. But there is a third category. These are states with modified helmet laws. These laws require helmet use by certain groups of riders, usually based on age and riding experience.

Also, motorcycle helmets are tested on human head forms for a 13 mph impact. But human head forms do not operate motorcycles at 50 mph. That makes a big difference. And I think I heard it put best at a transportation committee meeting in the Virginia House of Delegates by a member who said: “I would like to remind this committee that at our last meeting we heard compelling expert testimony that at 50 mph a motorcycle helmet becomes a 200 pound bowling ball attached by a strap to your neck.” So the evidence goes both ways.

Ultimately, helmet choice should be left to the individual, as it comes down to what Mr. Justice Brandeis called “The right to be let alone.”

Nevertheless, if you were involved in an accident without a helmet, the studies are manipulated to favor the insurance companies. But the facts often tell a different story. You need to retain an experienced motorcycle accident attorney who understands and can demonstrate the difference.